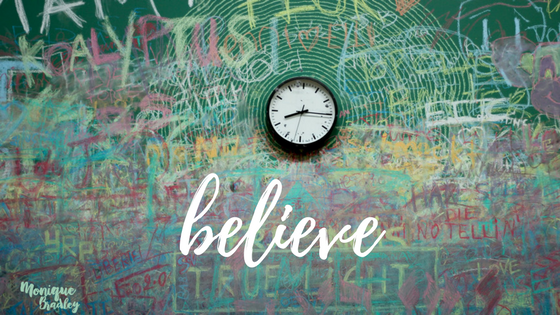 This weeks focus topic is all about the power of the mind: BELIEVE.

What do you believe about…..everything?

I’m going to share a little something about me with you. When I was 18 months old, I was admitted to hospital. I had been speaking in sentences since I was 1, however I couldn’t walk and as I was already very overweight and abnormally tall, the doctors were concerned that there was something wrong with my brain or that I was ‘retarded’. I came out of the brain scan and the doctors, after looking at both my parents who were morbidly obese, gave their diagnosis: ‘There’s nothing wrong with her brain. It’s just that elephants don’t make mice’.

For years, I held onto a belief that my genes were to blame. Looking at my family, many of them were, and still are, overweight.

We celebrated everything with food: happy times, sad times, someone visiting, someone going away, seasonal holidays….you know the drill. Leading up to Christmas was always a struggle as I was excited but always anxious about how many kilos I’d add this year. ‘But I can’t do anything about it, because it’s genetic.’

The bullies (and some of my school teachers) were pretty horrible to be fair and the constant reminders that I was fat and unacceptable or a ‘sideshow freak’ were pretty hard to deal with, so to make myself feel better I always had food. That rush from eating a Quarter Pounder and fries with a diet coke when you’re upset, or a chocolate afghan….all was well again….then I’d hide away at home listening to the Phantom of the Opera dreaming of when I could be slender and beautiful like the lead character Christine, while quietly feeling like a failure.

I was young when I started trying to secretly lose weight, however it never started to really happen till I developed anxiety from PTSD. I was 20. Finally all the beliefs and the chatters of other people’s opinions that I’d been holding onto about myself, exploded into this out of control panicky feeling, which I thought at the time was a heart condition. Through self diagnosis and misinformation (there was no Dr Google back then) I CHANGED my belief to: ‘I know my genes mean I’m likely to be fat, but if I don’t do something now, it could be game over!!!’

I made little changes at first and my daily anxiety attacks were the awful reminder that I needed to keep going.

It took me 8 months to transform from 110 kgs to 42 kgs and I can tell you right now, the anxiety was still the same. I’d lost weight and thought ‘great! I’ve beaten this and now I’ll be seen as acceptable when it comes to getting TV jobs!’ The only downside was that by not eating, I lost my energy, my sparkle and my personality as well. That’s not something I could blame my genes for. That was something I could only blame myself and my choices for.

I believed that being skinny would improve my health.

I believed that being skinny would help my career.

I believed that being skinny would make me more attractive and thus, more loveable.

And it was those beliefs that started what has been more than 25 years of battling with my weight and my perception of myself: up till now.

Here’s the thing: We all go about our day on autopilot. You know that feeling you have when you’ve driven somewhere and you can’t remember how you got there? That’s your subconscious kicking into action and doing what it’s meant to do. 90% of our day is governed by that autopilot /subconscious and that programming drives our choices, our actions and our behaviours.

Through years of allowing other people’s opinions of me shape how I felt about myself and my VALUE, I had created beliefs that were locked into my subconscious which meant that overeating or making crap food choices was literally a ‘no brainer’.

“I’m fat anyway, so I may as well have another bit of cake’.

I allowed those negative messages to justify my choices and that had lead to me gaining weight and feeling like crap. I’m not going to lie: my weight went up and down over the years and even this year I ballooned back up to a size 16 and that’s when I had to change something, consciously. Low carb has worked a treat.

How to change a belief

Here’s how it works: Repeated messaging whether it’s negative or positive self talk, affirmations, the music you listen to, advertising or media, works to carve a neural pathway in the brain that allows the brain to make a decision faster – when it needs to – via ‘the path of least resistance’. This is how your autopilot does it’s stuff. Only 10 % of your day is based around conscious choices so it’s important to consider what neural pathways have been carved in your brain that could be sabotaging your success!

If you’ve been struggling to make changes to your weight or your health, know that it is fixable! Carry a belief that you can’t lose weight, like I did, and you won’t bat an eyelid when your favourite aunty brings out a cream sponge. Start telling yourself a new story like: I love my body and I nurture it with healthy food that gives me energy and vitality’ and carve away. It takes around 30-40 days of repetition to change a belief, but you can do it. Setting reminders on your phone, or leaving yourself post it notes actually does work!

While living with anxiety everyday for more than 15 years was exhausting, it pushed me to create new beliefs which have actually helped change my choices, actions and behaviour for the better and I’m now strangely grateful for them.

I’ve learnt that being healthy and making conscious choices improves my health. It’s also helped with my anxiety as my body has the nutrition it needs to find balance again.

I’ve learnt that making healthy choices and eating food that fuels me and gives me back my ‘sparkle’ has helped my career.

I KNOW that making healthy choices has resulted in me feeling great and now people are attracted to my energy and vitality. I still blush when people tell me that I’m beautiful or that ‘Pete is a lucky guy’. Even just writing that made me crack up.

Most importantly. I’m not on a diet any more. There’s no anxiety and my body is finding out it’s own truth and deciding on it’s own perfect weight. I bought size10 jeans last week and the secret to my success? Changing my beliefs about myself.

Yes, your genes may have something to do with your weight, but so does making good choices.

So: what do you believe? What tales have you been telling yourself? And what new pathway are you ready to carve?

Choosing To CHANGE Your Life